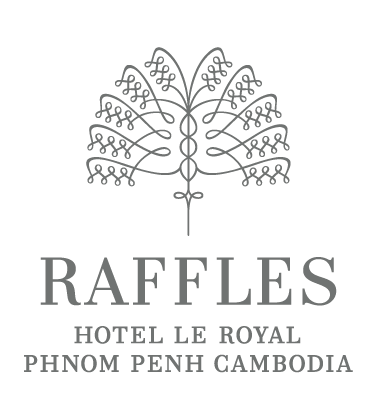 The story of our hotel begins in late 1923 and early 1924, when architect and urbanist Ernest Hébrard took on the task of transforming the face of Phnom Penh. His visionary plan involved filling in a canal, planting gardens and parks, designing a new central market and constructing a grand hotel. His was not the only hotel project launched at the time – Angkor Wat was gaining quite a following, and travellers needed places to stay on their journey to the sacred site – but it was certainly the most impressive.

Today, a wander through the neighbourhood surrounding Raffles takes you past many foreign institutions and embassies, an echo of its fashionable past as the European quarter. It’s hard to escape the magnificent view of Wat Phnom at the end of the tree-lined avenue that leads to the hotel – said to be the most beautiful street in Phnom Penh and the perfect setting for our story.

Hébrard outdid himself when he designed the original building, making it the tallest in Phnom Penh at the time and one of the largest. Favouring French Colonial style over traditional Khmer architecture, he created a place of unprecedented elegance in Cambodia.

In 1929, as the city enjoyed much growth and renown, the hotel celebrated its grand debut under the name Le Royal – a fitting label as the guest of honour at the opening bash was HM Sisowath Monivong, who reigned over Cambodia between 1927 and 1941. The royal link remains today, reflected in the ceiling art and exclusive recipes known only to our chefs.

Le Royal provided travellers with a choice of 54 beautiful bedrooms, only four of which did not come with private bathrooms – a highly-appreciated novelty at the time. From its opening through the turbulent 1970s, the hotel enjoyed its first heyday. High society from around the globe wanted to be among the first to lay eyes on the marvels of Cambodia. They were also eager to discover the hotel itself, which was building quite a reputation for its luxurious accommodations and unsurpassable sense of customer service.

The hotel name has changed a few times throughout the years. During the Lon Nol period from 1970 to 1975, it was known as Le Phnom. When Pol Pot took over in April 1975 and Phnom Penh finally fell to the Khmer Rouge, the hotel closed its doors to regular business. Instead, it is said to have housed Khmer Rouge offices and residential quarters. When it opened once again in 1980, after the fall of the communist regime, it became the Hotel Samakki, or Solidarity Hotel, and housed international aid agencies. In 1993, when HM Norodom Sihanouk was reinstalled, the hotel reverted to Le Royal once more.

In 1996, extensive renovations began under the supervision of Raffles. The original building was carefully restored to its former splendour while bungalows were torn down and replaced with three courtyard wings for increased hotel capacity. Local artisans were called upon to recreate design features that had not withstood the test of troublesome times. Royal artists transformed ceilings into works of art and our halls into galleries. Thus the hotel entered its second heyday.

Twenty years later, it was once again time for a renovation. The façade was restored to its original snowy white. The shady, dark rooms and suites – so necessary before air conditioning was in widespread use – received an illuminating facelift. Lighter and brighter, they retain all the nostalgic feel of bygone days. They also now possess all the modern technological conveniences needed to keep residents connected to today’s world.